Cinco de Mayo arrived with sun greeting us thru the bedroom patio door and we knew this get away was going to be a fun trip.  We scurried to shower, pack and prepare to get an early start on the road.  Wayne did notice that the bird feeders were getting low and when he checked he was almost out of bird seed and since we would be gone three days he hurried into town while I finished getting ready.  Yes, it does take me a bit longer than Wayne to pull a presentable out in public package together but I have it down to about a 20 minute procedure from wet, out of the shower hair, to out the door.  Not too shabby if I say so myself!

We hit the road and decided that we would eat breakfast in Vernonia, as we were going the scenic back way to Astoria and Wayne remembered a cafe that he, Tom and Roselie (our couch surfing friends) popped into for coffee when they went on a bile trek while they were staying with us.  It is always a beautiful drive to Vernonia and on Cinco de Mayo it was certainly dressed to impress with all the Spring trees blooming and beautiful flowers all along the way.   We were on Disc 4 of Dan Brown’s, The Lost Symbol, so we were also entertained along the way.  It is always fun to get to the next destination when we are listening to a book as we then have a lively conversation discussing each of our thoughts about what we have just heard.  This morning was no different and over an extremely yummy breakfast we had such a talk.  Now about breakfast at the Black Iron Grill in Vernonia….as you all probably know, eating is right up there on my top most loved things to do and this morning I think I found my new favorite breakfast!  I ordered the small breakfast burrito with bacon (and it even said extra crispy on the menu) and no tomatoes and Wayne had the Denver omlette which he really enjoyed.  To start with, the burrito was just the right size and I did not have to face a ginormous amount of food knowing I was going to waste a good portion of it which I always find a bit overwhelming and the bacon was, as advertised, extra crispy.  The salsa and sour cream were served in little bowls on the side so the burrito stayed all nice and together and I was able to add just the right amount of salsa and sour cream that I wanted.  Breakfast burrito perfection!  To top it off I was able to eat the whole thing and was totally satisfied!!  Que yummo, what a tremendously tasteful way to start our journey after breakfast.

The rest of the journey to Astoria was beautiful and the predicted rain did not find us along the way.  We had originally scheduled a three hour boat ride on the Columbia river for that day at 4:00pm but we got a call from Captain Chris while we were browsing thru a nursery in Long Beach Wa as we meandered up the Washington coast.  He said that Monday evening was looking a bit rough on the water and he rescheduled us for the next evening which was totally OK with us and it gave us time to wander around with no time pressure on the day and also allow us to plan dinner at one of our favorite restaurants, Silver Salmon in Astoria.  We drove around on the Washington side till it was time to check into our hotel.

We had never stayed  at the Cannery Pier hotel but since it was right on the river we knew we would enjoy the view and our stay, and we sure did.  The hotel was really accommodating and asked if we needed dinner reservations anywhere and said that the hotel’s 1937 Studebaker coup would drive us where ever we wanted to eat.  OMG was that ever a fun trip to and from Silver Salmon!  We have eaten at The Silver Salmon a few times and every time had a fabulous meal and tonight was no exception.  The evening special was a broiled wild caught salmon, smothered in crab with a light cream sauce on the side.  Wayne opted for the garlic mashed potatoes and I did the baked and I had the house salad with their house champagne vinaigrette dressing which is delightfully yummy.  Wayne opted for the chowder and he said it was really delish.  Each bite of the salmon was a taste delight and poor Wayne did not get to finish my serving, which he usually does as I ate every scrumptiously perfectly cooked bite.  Oh my mouth is watering just remembering the taste and I want to go back!  Now!!  Wayne ordered the house key lime pie for dessert and I did do my usual taste test, as a good wife should, and found it to be really tart but yummy  just as the waiter had said.  OK, I took two bites since it wasn’t really sweet but oh so satisfying as a final finish. 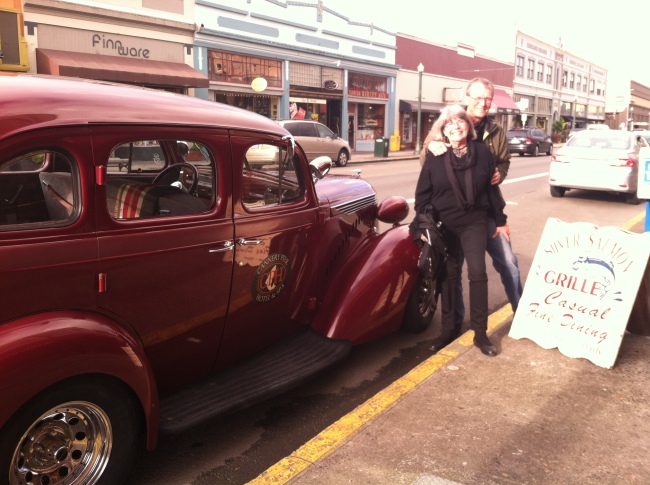 Back at the hotel. 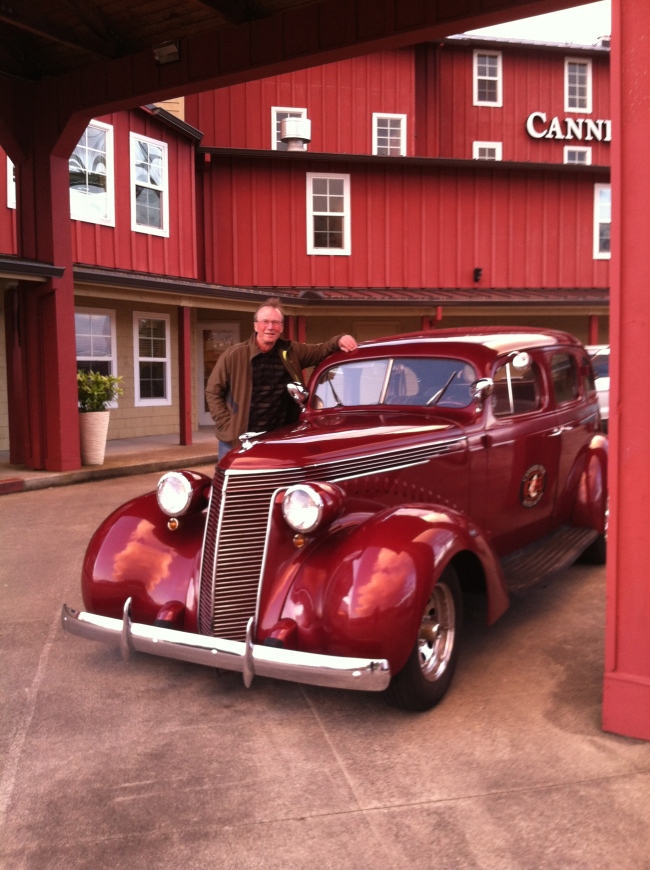 Our room was on the top floor with a balcony, king size bed, (we only have a queen at home) fireplace and a deep, deep claw foot tub.  Ahh, need I say more!!!! Oh yes, and a spectacular view. 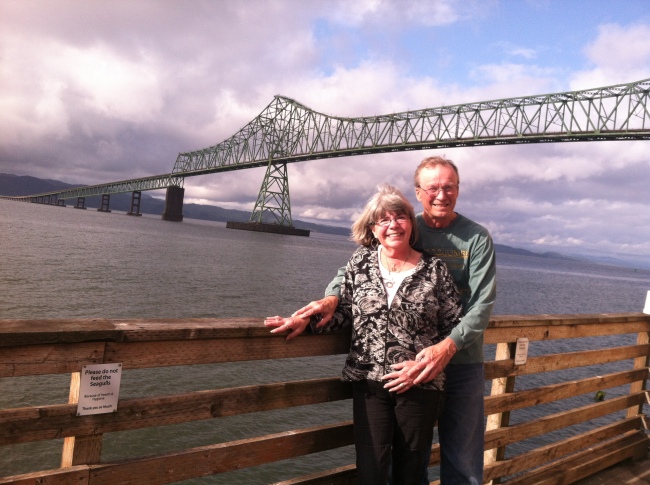 A bit windy but beautiful!!

We awoke to a sunny Tuesday and were thrilled to have another beautiful day greet us.  After the hotel breakfast which was rather nice, hard boiled eggs, sliced fresh fruit compote, assorted really nice fresh from the bakery donuts etc, muffins, bread and several choices of bagels, a good small box cereal selection along with oatmeal, make your own waffle and a bowl of whole fruits along with granola bars.  Three juices and absolutely taste bud savoring french roast coffee.  We left the hotel with big satisfied grins.

We decided that we would explore Fort Clatsup which even with all our travels in this area we had never been.  The visitor center is one of the nicest I have seen and along with an interactive tv to view all the sights of the part, there was also a theater which showed tow movies, one about the native indians and how Lewis and Clark built the fort and the other was the Lewis and Clark documentary that we have seen on Netflix.  Quite impressive.  Due to a fire several years back, the whole fort has been rebuilt but even though not a crude as the original would have been it really gives you the feel for the conditions that they lived with.  Interesting.

We then went to explore Oysterville just because of the intriguing name.  A great location right next to an oyster bed but really not much there but a small grocery store and homes.  On we went, meandering our way back to Astoria to meet our Captain at 4:00pm for the boat ride when low and behold in Warrenton we spotted a Costco and since it was one of the stops for the next day on our way home we decided to pop in.  We had lunch at a friends house a few weeks back and Wayne had a cup of San Francisco French roast coffee they had gotten at Costco and made with their Keurig machine.  Wayne, with his very discriminating coffee palate, thought it was yummy  and with the ever rising cost of getting our pods from Keurig we thought we needed to check out Costco.    They were having a manufactures $4.00 discount per box of 80 pods and it brought the cost per cup from our current cost of 50 cents to 25 cents per cup.  Great savings.  Well, that always sounds so great when you calculate the item savings at Costco but we all know that no one and I mean, NO ONE, ever leaves Costco with just the items that you came for.  We, of course, went on to pick up some nuts, which were needed but then it happened.  Wayne spotted some trekking poles that he has been saying that he wanted me to get to help me navigate nature walks that we love to do together.  With my butt, hip, leg (sciatica) issue I usually find myself hanging onto his arm which I am sure gets really annoying after a while especially when trying to traverse uneven ground as is usually the case.  Yup into the cart they went and little did I know with a surprise Wayne had planned for on the way home I would be so glad we got them.